Hunters taking to the field for mule deer season in six southeast Panhandle counties are encouraged to take a closer look before pulling the trigger as new antler restriction regulations take effect.
The Texas Parks and Wildlife Department is implementing new experimental regulations that prohibits harvest of any mule deer buck with a main beam outside spread of less than 20 inches starting this fall in Briscoe, Childress, Cottle, Floyd, Hall, and Motley counties.
Mule deer season in the antler restriction counties occurs runs Nov. 17 – Dec. 2.
The goal of the new regulations is to improve buck age structure and sex ratios in these counties by reducing excessive hunting pressure on younger bucks. A similar antler restriction for white-tailed deer has been in place for a number of years in other parts of the state, and has successfully shifted the age class structure toward older bucks.
To protect young bucks, TPWD has set the minimum legal outside spread of the main beams at 20 inches based upon many years of harvest data. In other words, any buck having main beams with an outside spread smaller than 20 inches is NOT legal to harvest.  Additionally, any buck with at least one unbranched antler (e.g., spike) is NOT legal to harvest, unless the outside spread of the main beams is 20 inches or more in width.  Based upon data collected by TPWD, the average ear-tip to ear-tip spread of 2 ½ to 8 ½+ year old mule deer bucks with ears in the alert position is about 21 inches. This information on ear-tip to ear-tip measurement can be a useful guide to mule deer hunters attempting to field-judge mule deer bucks with at least a 20-inch main beam outside spread.
Mule Deer Buck Antler Restrictions Guide
Legal vs. Not Legal 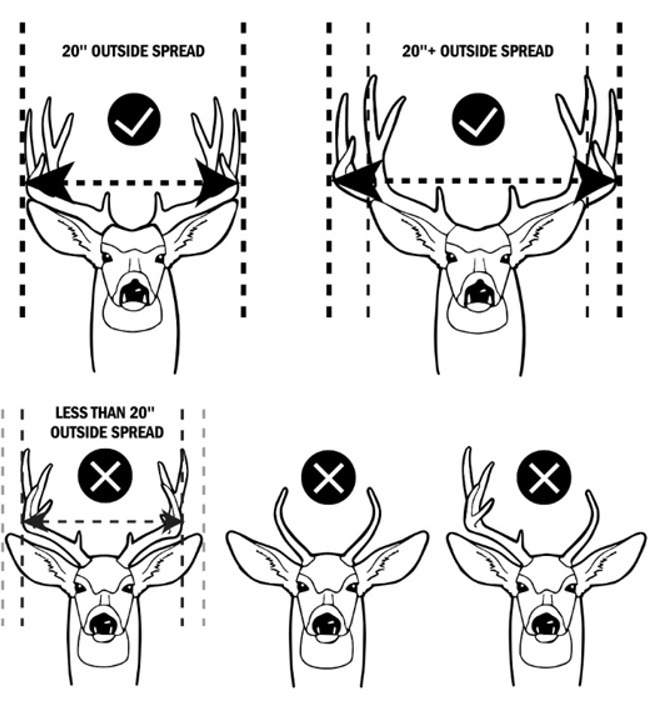 The experimental antler restriction will be conducted for four hunting seasons. TPWD wildlife officials will collect age and antler measurements at voluntary hunter-harvest check stations to assess the effects of the regulation on buck age structure. Annual aerial surveys will be used to document sex ratios. Based on findings after four years, TPWD will either propose to extend the regulation, modify the antler restriction, or permanently terminate.
To gather the most harvest data possible, TPWD will offer incentives to hunters who check their harvest.  Hunters who bring their harvest to a check station will be entered in drawings for items such as rifles, lifetime hunting licenses, and gift cards donated by Dallas Safari Club, the Texas Panhandle Chapter of the Dallas Safari Club, the Mule Deer Foundation, and Houston Safari Club.  These data are essential to effectively evaluate the success of the experimental antler restriction.
More information regarding mule deer seasons, the experimental antler restriction, check station locations, dates and hours of operation, check station incentives, and drawing results is available online.